Despite some disappointing economic data, markets moved higher again last week. Both the Dow and S&P 500 posted new highs on Thursday, boosted by an upbeat jobs report. While U.S. investors still seem to lack some conviction, money is pouring in from Asia and Europe, as foreign investors seek growth.[i] For the week, the S&P 500 rose 2.29%, the Dow gained 2.06%, and the Nasdaq grew 2.84%.[ii]

Retail sales contracted in March for the second time in three months, and consumer confidence tumbled in April in a double-whammy that sent equities into a spiral early last week. Retail sales fell 0.4% in March, and a gauge of consumer sentiment fell in April to the lowest level since July 2012.[iii]  These numbers are concerning because consumer spending is 70% of GDP and may signal that tax hikes and increases in gasoline prices have stolen some momentum from first-quarter GDP growth. While retail spending can be volatile, consumers cut back across a wide range of categories, indicating that there’s not one dominant area driving the decline. One retail category, furniture, saw an increase last month, showing that the housing recovery is still driving a measure of spending.[iv] Prior economic reports have glowingly stated that Americans were shrugging off new payroll taxes and continuing to spend. However, data now suggests that consumer spending was much weaker in Q1 than originally forecast.

On a more positive note, the number of Americans filing unemployment claims fell more than expected last week, easing fears of a deteriorating job market. After the previous week’s unexpectedly bad jobs report, we were relieved to see that jobless claims were back in line with expectations, indicating that the March numbers were a seasonal aberration, rather than an underlying weakness in the economic recovery.[v]

Looking at the week ahead, investors will be watching earnings reports closely to size up the recent soft patch and see what business leaders expect in the coming months. Next week will be light on economic data, but about a third of Dow Industrial companies and 70 S&P 500 companies will be reporting their first quarter earnings.[vi]

We will not be surprised to see a measure of volatility in the weeks to come as markets pore over earnings reports and additional first-quarter economic reports. Markets will also be watching the saber rattling in North Korea; thus far, America and its allies appear to be watchful but unconcerned about the totalitarian nation’s threats, but that could change should North Korea make active moves toward the border.

Always remember to stay focused on your long-term financial strategy; short term ups and downs, while sometimes stressful, are a normal part of healthy markets.

NOTE: Don’t forget that Monday, April 15, is the final deadline to make qualified contributions for the 2012 tax year. Feel free to call our office if you need assistance with this. 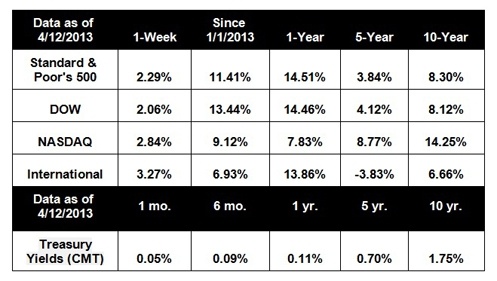 Notes: All index returns exclude reinvested dividends, and the 5-year and 10-year returns are annualized. Sources: Yahoo! Finance and Treasury.gov. International performance is represented by the MSCI EAFE Index. Past performance is no guarantee of future results. Indices are unmanaged and cannot be invested into directly.
The Standard & Poor's 500 (S&P 500) is an unmanaged group of securities considered to be representative of the stock market in general.
The Dow Jones Industrial Average is a price-weighted average of 30 significant stocks traded on the New York Stock Exchange and the NASDAQ.
The Nasdaq is a computerized system that facilitates trading and provides price quotations on some 5,000 of the more actively traded over-the-counter stocks