Markets ended another week down after mixed economic data, lower oil prices, and a strengthening dollar made investors nervous ahead of the next Federal Reserve meeting. For the week, the S&P 500 lost 0.86%, the Dow fell 0.60%, and the NASDAQ dropped 1.13%[1]

The dollar became the focus of a lot of speculation last week when it reached multi-year highs against a weakened euro.[2] The return of "King Dollar" worries many analysts because it means that foreigners can afford to buy fewer U.S. goods, depressing demand for many U.S. firms and cutting into profits. On the other hand, a stronger dollar makes imports cheaper and increases the buying power of U.S. consumers, which has been historically good for the economy.[3]

Speaking of history, Monday, March 9, 2015 marked the sixth anniversary of the current bull market, which began on March 9, 2009. Though markets have been turbulent in recent weeks, let's take a moment to think about how far we've come since the dark days of the financial crisis. Since the bottom of the stock market, the S&P 500 has gained 203.52%, surpassing previous market highs along the way.[4] 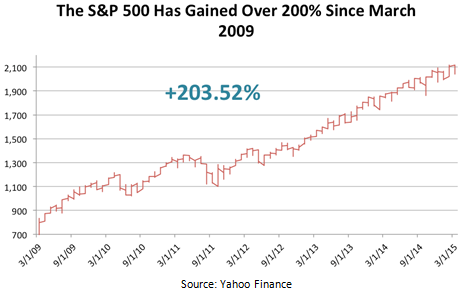 We've seen major improvements in economic fundamentals as well. Since peak unemployment of 10.0% in October 2009, the unemployment rate has dropped nearly in half to 5.5% as of last month. With millions of Americans back to work and contributing to the economy, economic growth has also made significant gains. From the fourth quarter of 2008, when Real Gross Domestic Product decreased at an annual rate of 6.3%, the economy has improved, reaching 5.0% annualized growth in the third quarter of 2014 and 2.2% (estimated) growth in the fourth quarter.[5,6]

Bottom line: Economic fundamentals have come a long way and there are plenty of factors that support continued equity growth. That's not to say that there aren't headwinds that may affect market performance in the future. The Federal debt debate is rearing its ugly head again in Washington as lawmakers square off about the Treasury debt ceiling, which will be breached this week.[7] We're also approaching the end of the first quarter and investors will be looking toward corporate earnings releases to see how U.S. companies performed. Markets may remain choppy as investors take stock of current fundamentals and try to predict how policy changes may affect markets.

This week, analysts will be closely watching the Federal Reserve's two-day policy meeting, which is one of the most important we've had since last year. Though we don't expect the central bank to raise rates this week, investors should know a lot more about the Fed's plans once the meeting is over.[8]

Weekly jobless claims drop more than expected. The number of Americans claiming new unemployment benefits fell last week, erasing much of the previous weeks' increases. Economists suspect seasonal factors are at play and that the labor market continues to improve.[10]

Consumer sentiment slides for fourth straight month. American consumers ratcheted back their optimism about the U.S. economy in early March, though temporary factors may be affecting data. While affluent Americans remain confident about the future, lower and middle-income consumers are worried about their prospects.[11]

These are the views of Platinum Advisor Marketing Strategies, LLC, and not necessarily those of the named representative, Broker dealer or Investment Advisor, and should not be construed as investment advice. Neither the named representative nor the named Broker dealer or Investment Advisor gives tax or legal advice. All information is believed to be from reliable sources; however, we make no representation as to its completeness or accuracy. Please consult your financial advisor for further information.

Investing involves risk including the potential loss of principal. No investment strategy can guarantee a profit or protect against loss in periods of declining values.

Diversification does not guarantee profit nor is it guaranteed to protect assets.

The Dow Jones Industrial Average is a price-weighted average of 30 significant stocks traded on the New York Stock Exchange and the NASDAQ. The DJIA was invented by Charles Dow back in 1896.

The Nasdaq Composite is an index of the common stocks and similar securities listed on the NASDAQ stock market and is considered a broad indicator of the performance of stocks of technology companies and growth companies.

The MSCI EAFE Index was created by Morgan Stanley Capital International (MSCI) that serves as a benchmark of the performance in major international equity markets as represented by 21 major MSCI indexes from Europe, Australia and Southeast Asia.

The Dow Jones Corporate Bond Index is a 96-bond index designed to represent the market performance, on a total-return basis, of investment-grade bonds issued by leading U.S. companies. Bonds are equally weighted by maturity cell, industry sector, and the overall index.