Markets finally snapped their winning streak on concerns of Eurozone trouble with Cyprus. Despite the early sell-off, markets rose later in the week to erase most of the losses. For the week, the S&P500 lost 0.24%, the Dow slid just 0.01%, and the Nasdaq trimmed 0.13%.[1]

Equities began the week with a broad sell-off amid news surrounding Cyprus, which desperately needed Eurozone bailout money to recapitalize its failing banks. The Cypriot parliament voted down the original proposal that would have taxed all bank accounts to raise additional funds, but was able to clinch a last-minute deal with international lenders that will recapitalize the country's ailing banks with €10 billion in rescue funds. The provisions of the deal include shutting down Cyprus' second-largest bank and raiding bank deposits over €100,000, which are not guaranteed under EU law, to raise an additional €4.2 billion. While Cyprus was able to avert a disorderly default (and probable Euro exit), appropriating funds from uninsured depositors, including wealthy Russians, will have far-reaching consequences for Cyprus' business model as a financial haven for foreigners.[2]

On the home front, Congress finally ended the threat of government shutdown by approving a bill funding the government through the end of 2013. While sequestration cuts are still ongoing, the bill will ease some of the pain of mandatory cuts.[3]

On a related note, senators approved a non-binding $3.7 trillion 2014 budget agreement late last week during a marathon voting session that lasted until the early hours of Saturday morning. In stark contrast to the House budget, which slashed government spending, the Senate budget increased government spending while simultaneously increasing taxes on the wealthy. In some years, House and Senate budgets are reconciled, but that is not likely to happen this year due to the politically charged nature of the debate.[4]

Regardless of what happens far away in a country like Cyprus, or here at home in the U.S., we'll continue to monitor events that have the potential to impact your investments, and will keep you informed. We hope you have a great week! 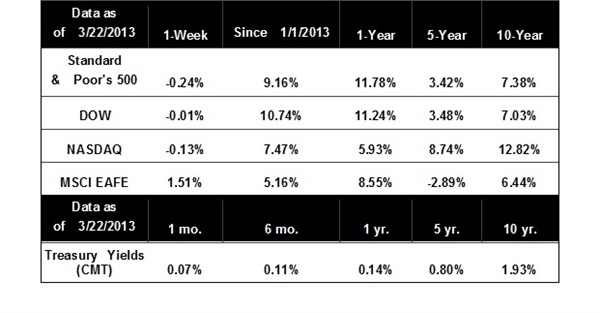