Markets turned out another solid performance last week as all three major indices reached new highs. With minimal economic data for investors to chew on, earnings drove most of the market action last week. On Tuesday, the S&P 500 set a new high while the Dow notched its first close above the 15,000 mark. Industrials, technology, and consumer discretionary stocks led the gains while utilities and consumer staples dropped. For the week, the S&P 500 added 1.19%, the Dow gained 0.97%, and the Nasdaq increased 1.72%.[i]

As we near the end of earnings season, 90% of S&P 500 companies have reported in, with 67% beating earnings expectations. If all remaining companies post numbers in line with estimates, earnings will be up 5.3% over the first quarter of 2012. However, most companies are still missing their revenue estimates, with only 46% beating their own revenue projections. Next week, a handful of major retailers are due to report, which, along with Monday’s retail sales report, will give sector analysts a lot to think about.[ii]

After markets closed for the weekend, Federal Reserve officials announced their strategy for unwinding QE3, their unprecedented $85 billion per month bond-buying program. While they didn’t confirm the timing of intended moves, officials said they plan to reduce bond purchases in careful, measured steps as they monitor the job market and inflation. Because it doesn’t look like the Fed intended this announcement to mark the end of quantitative easing, it appears they meant to signal their flexibility in managing the programs in the months ahead.[iii]

Looking ahead, the bulls could keep running next week as long as economic reports on labor, retail sales, industrial production, and manufacturing don’t disappoint. However, with equities reaching new highs, there are plenty of opportunities for weakness to end the run. If investors think that markets are overbought, some consolidation might occur. The market activity thus far suggests that investors are betting on increasing economic growth, and the Fed’s announcement seems to indicate that officials aren’t too worried about the U.S. economy at this time. As always, we’ll keep an eye on the action and will keep you informed. 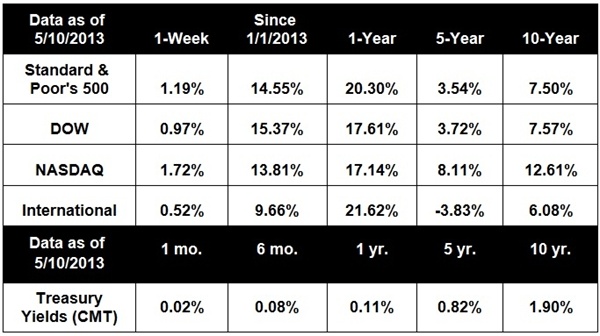 The Standard & Poor's 500 (S&P 500) is an unmanaged group of securities considered to be representative of the stock market in general.
The Dow Jones Industrial Average is a price-weighted average of 30 significant stocks traded on the New York Stock Exchange and the NASDAQ.
The Nasdaq is a computerized system that facilitates trading and provides price quotations on some 5,000 of the more actively traded over-the-counter stocks